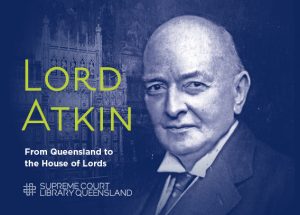 HAL hosted a lecture by the Honourable Justice Peter Applegarth, and tour, of the Lord Atkin Exhibition at the Supreme Court Library, Queen Elizabeth II Courts of Law, on 11 May 2018.

His Honour’s lecture was one of a number of events to commemorate the 150th anniversary of Lord Atkin’s birth in Brisbane and his lasting legacy to the common law.

The lecture reflects HAL’s focus on one of its major objectives to provide continuing legal education and the exchange of legal information.

His Honour guided more than 40 guests through a series of fascinating displays exploring Lord Atkin’s:

James Richard Atkin was born in Tank Street, Brisbane on 28 November 1867. Atkin’s parents had emigrated from England to the newly established colony of Queensland in 1864.

After a period on the land, Atkin’s father established himself in Brisbane as a journalist. He also became a member of the Legislative Assembly. Unfortunately, his failing health – ultimately resulting in his death in 1872 – led to the rest of the family returning to a family home in Wales.

Atkin read for a degree in classics at Magdalen College, Oxford, and then was called to the Bar by Gray’s Inn (1891). Atkin soon became a leading member of the commercial Bar, taking silk in 1906. Judicial elevation swiftly followed. Atkin was appointed a judge of the Kings’ Bench Division (1913), Lord Justice of Appeal (1919) and then Lord of Appeal in Ordinary (1928).

During his judicial career Atkin was not only respected as a technically proficient lawyer but admired for his insight and judgment. It was this combination of qualities that produced a number of judgments of lasting importance and global influence.

These judgments included Donoghue v Stevenson (1932), where Lord Atkin’s speech famously articulated the ‘neighbour principle’ upon which the modern tort of negligence has been founded. They also include his famous dissent in Liversidge v Anderson (1942), where he sought to strike down a wartime internment decision that had been given without reasons. Drawing upon the principles underlying the rule of law, Lord Atkin rejected the view that the reasonableness of this decision was immune from scrutiny.

Justice Applegarth’s entertaining prelude to the library tour also alluded to the many challenges facing emigrants to Australia, from many different lands, and the challenge of establishing themselves.

Another of Lord Atkin’s links to Greece is that one of his grand-daughters settled in the country.

The free exhibition, which examines Atkin’s life, career and impact, is in the Supreme Court Library on Level 12 of the Queen Elizabeth II Courts of Law and will be open until November 2018.

Lord Atkin was one of the most influential judges of his or any generation.  His landmark judgments still guide the laws of our nation and the rest of the common law world today.

To commemorate this anniversary and Atkin’s lasting legacy to the common law, the Supreme Court Library launched a new exhibition, Lord Atkin: from Queensland to the House of Lords.

One of the major objectives of the Hellenic Australian Lawyers Association (HAL) is to provide continuing legal education and the exchange of legal information.

HAL is delighted to be hosting a lecture by the Honourable Justice Peter Applegarth, and tour, of the Lord Atkin Exhibition at the Supreme Court Library, Level 12, Queen Elizabeth II Courts of Law, 415 George Street, Brisbane, on 11 May 2018 from 5:30pm to 6:30pm.

Justice Applegarth will refer to a modern day link between Lord Atkin and Greece.

The event will be followed by light refreshments.

There is no charge for this event.  There are limited spaces available so early bookings are encouraged.

RSVP via Trybooking by 27 April 2018, if not booked out earlier.

This was the third Freeleagus Oration held by the Queensland Chapter, following orations delivered by Justice Kyrou in 2015, and Chief Justice Kiefel AC in 2016.

The title of the 2017 Oration was The Jury on Trial: From Socrates to Modern Times, with more than 270 guests in attendance.

It was held at the Banco Court of the Supreme Court of Queensland, QEII Courts of Law Complex, 415 George Street, Brisbane.

A Tribute to the late Alexander Christy Freeleagus was provided by Michael Klug AM, while the Queensland Chapter Patron, The Hon Justice Anthe Philippides, Judge of Appeal, Supreme Court of Queensland, made a Closing Address.

The 2018 Freeleagus Oration will be delivered on 19 October 2018 by the President of the Queensland Court of Appeal, the Hon. Justice Walter Sofronoff.

QLD: Chief Justice on the influence of Greek philosophy in law – 29 March 2017

The Queensland Chapter of the Hellenic Australian Lawyers Association was honoured on Wednesday 29 March 2017 to host a seminar where the Honourable James Allsop AO, Chief Justice of the Federal Court of Australia, delivered a paper at the Harry Gibbs Courts of Law in Brisbane.  Judges of the State and Federal Courts, representatives from the Queensland Bar Association, practitioners, academics and students were in attendance.

The event commenced with a performance by the amazing Yugambeh Youth Choir, who performed songs in the native Yugambeh language. This marked the Choir’s second performance in a court setting, following on from their highly successful concert in the Banco Court foyer of the Supreme Court of Queensland in December 2016, again hosted by the Hellenic Australian Lawyers Association.

Chief Justice Allsop presented a scholarly and learned paper entitled “Rules and Values in Law: Greek Philosophy; the Limits of Text; Restitution; and Neuroscience – Anything in Common?”

Following Chief Justice Allsop’s address, the Honourable Justice Anthe Philippides, Queensland Patron of the Hellenic Australian Lawyers Association and Judge of Appeal of the Supreme Court of Queensland, presented her perspectives on the role that Greek philosophy has played in shaping principles of contract and equity.

Her speech ‘Rules and Values in Law: The Influence of Greek Philosophy’ can be viewed at this link.