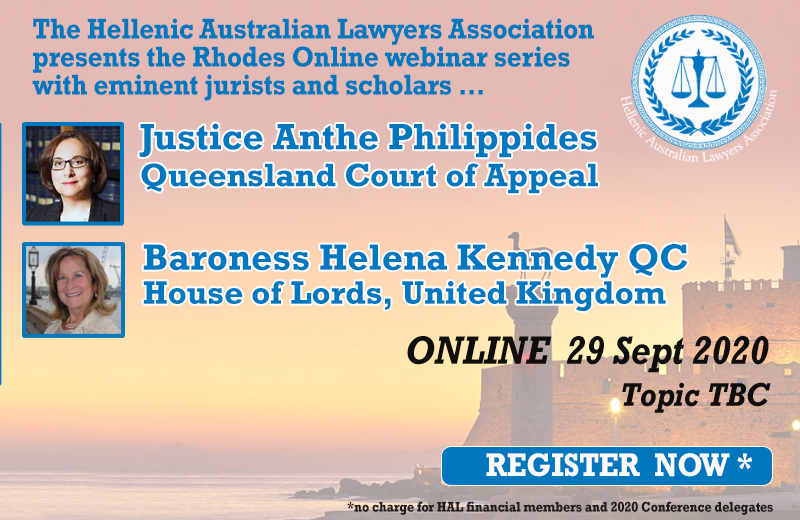 The Hellenic Australian Lawyers Association announces that Baroness Helena Kennedy QC, and Justice Anthe Philippides of the Court of Appeal, Queensland, will jointly hold a webinar on Tuesday 29 September 2020.

The time and topic of the webinar will be confirmed in the near future.

She also chaired the Power Inquiry, which reported on the state of British democracy and produced the Power Report in 2006. She has received honours for her work on human rights from the governments of France and Italy and has been awarded more than 40 honorary doctorates.

She has practiced at the Bar for 40 years in the field of criminal law and has conducted many of the leading cases in those years, including the Balcombe Street Siege, the Brighton bombing trial, the Guildford Four Appeal, the Michael Bettany Espionage case, the bombing of the Israeli embassy, the Jihadist fertiliser bomb plot, and the transatlantic bomb plot.

She has championed law reform for women, especially relating to sexual and domestic violence and developed the defence of Battered Women’s syndrome in the British courts. She was also the leading voice for equal opportunities in the legal profession for women. She authored a number of books on law reform, wrote the successful television series Blind Justice and became a well-known broadcaster on law and ethics during the eighties, presenting the BBC’s Heart of the Matter.

She has chaired the British Council and the UK Human Genetics Commission. She has been a member of the House of Lords for over 20 years, where she chairs the European Union Sub-Committee. She is chair of Justice, the British arm of the International Commission of Jurists. She is an Honorary Fellow of the British Academy and the Royal Society of Edinburgh. She has also been honoured by the Governments of France and Italy. She is the chair of the Booker Prize Foundation. She has stepped down as Principal of Mansfield College, Oxford and become the new Chancellor of Sheffield Hallam university. She has received honours for her work on human rights from the governments of France and Italy and has been awarded more than 40 honorary doctorates.

Justice Philippides obtained a Master of Law at Cambridge University (Gonville & Caius College) in 1985. Justice Philippides was admitted as a barrister of the Supreme Court of Queensland in 1984 and took silk in 1999. While at the bar, Justice Philippides developed particular expertise in maritime law and was elected President of the Maritime Law Association of Australia and New Zealand. Her Honour has served on the Port of Brisbane Corporation, Maritime Industry Consultative Council and the Australian National Maritime Museum. She is a titular member of the Comité Maritime Internationale.

She is the Queensland Patron of the Hellenic Australian Lawyers Association. Her Honour has served as honorary Vice Consul for Cyprus in Queensland.