Interest continues to grow in HAL’s inaugural International Legal Conference in Rhodes later this year, with the announcement that the President of Greece will officially open the Conference on 9 July 2018. 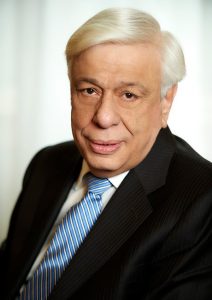 H.E. the President of the Hellenic Republic Mr. Prokopios Pavlopoulos

H.E. the President of the Hellenic Republic Mr. Prokopios Pavlopoulos will open proceedings, while the Mayor of Rhodes, Mr Fotis Chatzidiakos, a lawyer by profession, will officially welcome speakers and delegates.

The venue for the opening and welcome will be the spectacular Bastion of the Grand Master’s Palace, Rhodes, which is within a declared UNESCO World Heritage Site being the Medieval Old Town and was the 2017 winner of the European Union Prize for Cultural Heritage in the Category of Conservation.

The Conference has attracted, as speakers, a number of eminent jurists and scholars, including keynote speaker Chief Justice Susan Kiefel AC, Chief Justice of the High Court of Australia.

Several Chief Justices and Judges of Appeal, along with other international jurists, will speak on a number of different topics, related to the Conference theme of “Contemporary Legal Issues and the Influence of Hellenism”.

President of HAL, Mal Varitimos QC, said the Association was very grateful that the Ministry of Culture and the Municipality of Rhodes have kindly permitted the use of the Bastion of the Grand Master’s Palace.

“The Conference will feature engaging topics for lawyers and accompanying persons, whether or not of Hellenic background, and the Conference Opening at the Bastion will be just one of many opportunities to witness amazing historical sites and cultural activities,” he said. 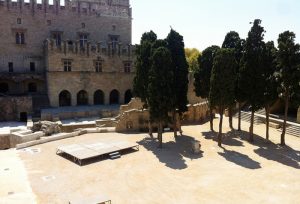 Bastion of the Grand Master’s Palace, Rhodes, part of the Medieval Old Town and venue for the Opening and Welcome of the HAL International Legal Conference.

“HAL is privileged to have the President of Greece and Mayor of Rhodes involved in this  Conference, and we deeply appreciate their support.”

The President of Greece, Prokopios Pavlopoulos, is the Head of State of Greece and was elected by the Hellenic Parliament.  His Excellency was born in 1950 in Kalamata, Greece.  In 1968 he was accepted at the Athens Law School from which he graduated, with distinction in 1973, before moving to Paris for postgraduate studies.  In 1974 he obtained a Master of Advanced Studies (DEA) in Public Law from the University Paris 11 and in 1977 he obtained his PhD (Doctorat d’ État) with distinction. In 1982 he started his academic career at the University of Athens Law School where he was elected Assistant Professor (1983), Associate Professor (1985) and Professor in 1989. Moreover, he taught and conducted research as a visiting Professor at Paris 11 University (1986).

Support for the Conference has been overwhelming, with registrations of delegates and accompanying persons approaching capacity.

Those interested in attending are urged to register without delay, with registrations closing in March.

The Conference has attracted interest in the Greek media, with several reports in Greece highlighting the official opening by the President of Greece and that Chief Justice Susan Kiefel AC will be the keynote speaker.

HAL wishes to thank and acknowledge the support and generosity of the following conference sponsors:

For other sponsorship opportunities available please contact Mal Varitimos QC, Conference Chair, on (07) 3008 4200 or by email at Rhodesconference@hal.asn.au