The Hellenic contribution to Tasmania’s judicial and educational foundations will be highlighted in Hobart next month with an Oration honouring Tasmanian Sir John Demetrius Morris KCMG, the first Chief Justice in Australia of Hellenic origin.

The Tasmanian Chapter of Hellenic Australian Lawyers, in conjunction with the Faculty of Law, University of Tasmania, will hold this event on Friday, 16 March 2018 as part of the annual Estia Greek festival of Hobart. 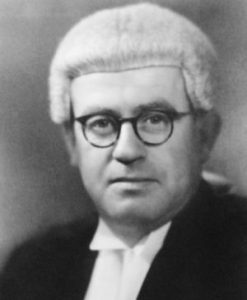 National patron of HAL, Chief Justice of South Australia the Hon. Chris Kourakis, will deliver the inaugural HAL Sir John Demetrius Morris Oration, entitled “Greek Independence and its Significance to the Development of International Law”, at the Centenary Lecture Theatre, Centenary Building, Sandy Bay Campus of University of Tasmania, from 6pm on 16 March.

Chair of the Tasmanian Chapter of HAL, Mr Con Tsamassiros, said the dedication of the Oration to Sir John was testament to his contribution to Tasmania, where the former Chief Justice’s work stretched far outside the administration of justice.

“He took on vice regal duties as Administrator from time to time, was instrumental in the establishment of educational management facilities, as well as being Chancellor of the University of Tasmania,” said Mr Tsamassiros.

The recorded Hellenic origins of Sir John stretch back to his grandfather, Christoforos Moros, born on the island of Poros in 1835 in a sea-faring family, and who braved the waves to land in Melbourne in the 1860s seeking rewards on the Victorian goldfields.

Christoforos Moros succeeded in business, ironically not as a miner, but in boat hiring on the Yarra.

He anglicised his name to Christopher Morris, and died a relatively wealthy man.  He had a number of sons, one of whom, Demetrius, referred to elsewhere as James Demetrius, became a senior public servant. Sir John was the son of James Demetrius.

The Mercury newspaper on 20 August 1941 welcomed his appointment as Chief Justice, quoting Sir John’s opening statement on being sworn in to the Supreme Court, expertly capturing his dedication to fair treatment in court:

“The duty lies upon me, by plain, unostentatious doing of every task, to publish to the world that in this Court any man can come, and, no matter what the consequences, he will get justice, without fear, favour or affection.”

Sir John had assumed a position of great responsibility, the Mercury correspondent continued, as “the guardian in Tasmania of the integrity and honour, unassailable and incorruptible, of the British judiciary”. 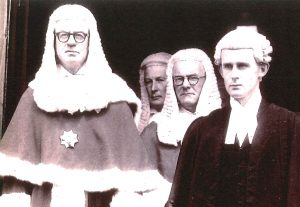 Sir John had assumed a position of great responsibility, the Mercury correspondent continued, as “the guardian in Tasmania of the integrity and honour, unassailable and incorruptible, of the British judiciary”.

He was knighted in 1943 and elevated to KCMG (Knight Commander of the Most Distinguished Order of St Michael and St George) in 1952.

Sir John enjoyed “the respect and confidence of the legal profession”, and was known for his “natural charm and social ease”, according to his entry in the Australian Dictionary of Biography (Vol 15, 2000).

Sir John served as Chief Justice until 3 July 1956, when he died at his desk, aged only 53, of a heart attack.

His legacy endures: his son, John Paul Morris AM served as Tasmania’s Chief Magistrate from 1987 to 1994, while his grandson, David Morris, is a partner in the Hobart law firm Simmons Wolfhagen, and a third generation lawyer.

Sir John’s son, John Paul, has recounted events from his father’s life in an oral history that depicts the varied and busy life of the state’s most senior judicial officer. 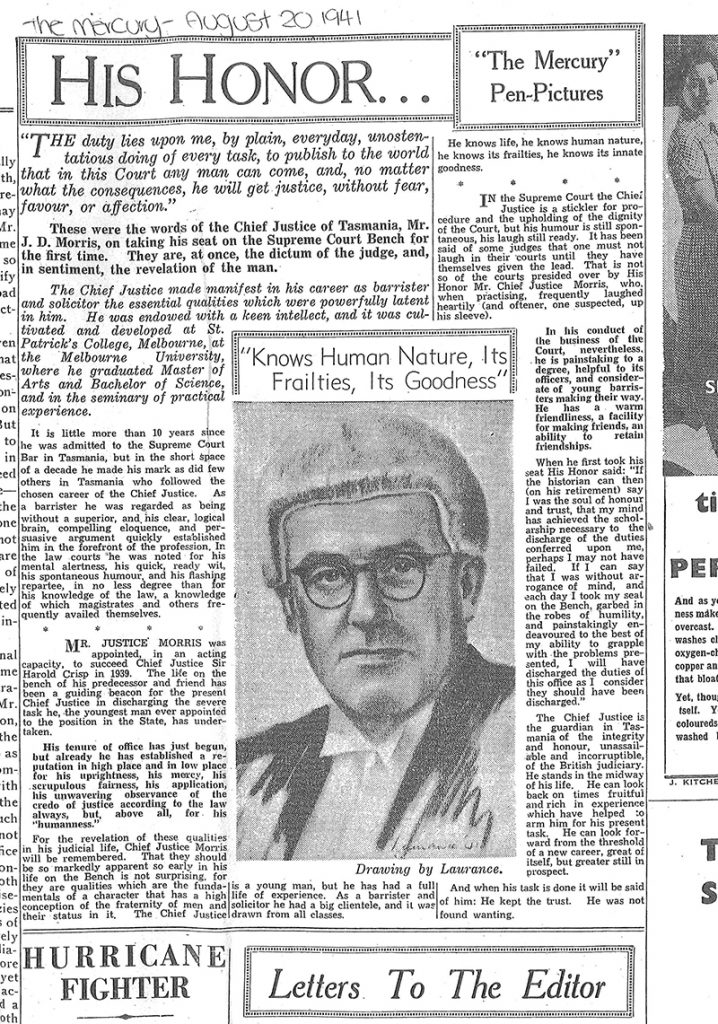 Clipping from the Hobart Mercury, August 1941.

Mr Morris also describes the work of his mother in establishing their home at Winmarleigh at Taroona, which remains a stately home in Hobart. There, he recalls, his parents held receptions for visiting national and international dignitaries, often on a limited budget.

“In those days there was no entertainment allowance and consequently everything had to be paid for out of my father’s pocket.”

John’s contribution to the Tasmanian community was not confined to his work as Chief Justice. He took on vice regal duties as Administrator from time to time. He was instrumental in the establishment of the State Library Board, and of the Adult Education Board, which replaced the Workers’ Educational Association.  He was the Chancellor of the University of Tasmania from 1944 until his death.

Fittingly, in 1955 at the invitation of the International Commission of Jurists, Sir John attended a conference in Athens.

“This was not long before he died, and it was fitting that he went back to the place of his ancestors,” Sir John’s son recalled.

The inaugural HAL Sir John Demetrius Morris Oration on 16 March 2018 represents an opportunity for the legal fraternity, philhellenes and those of Hellenic origin to recognise and celebrate the inestimable contributions of Sir John, his family, and the many other Australians of Greek origin to the progress and prosperity of Tasmania.

The event is generously sponsored by local firm Simmons Wolfhagen.